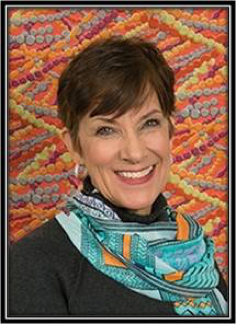 Angela Lawrence
Angela has taught needle-turn and wool appliqué as a guest artist at numerous Quilt Shops and Quilt Guilds throughout the United States since 1998. She has been an instructor at numerous state and regional shows such as the Minnesota Quilt Show, Quilt Nebraska, and the American Quilters Society (AQS).

Applique Group Membership:
The Group meets on the third Thursday of the Month in prescheduled 6-session blocks in the retreat center at Woodside Quilting.
At this time Angela is not having in person classes due to COVID-19. If this changes we will let you know.

If you are interested in joining this Applique Group, which has been meeting for several years, or would like more information, please contact Angela Lawrence at lawrencea@mchsi.com.

Angela will also be teaching many new classes in Appliqué at Woodside.
Check our class listing for what may be coming soon.
More about Angela:
In 2005, Angela launched her pattern company, "Appliqué After Hours", which features more than 100 exquisite patterns for needle-turn, machine, and wool appliqué.  In July 2012 she published her first book, "Needleturn Appliqué, the basics & beyond" through Landauer Publishing, and in February 2016 released her second book, "Bright & Bold Wool Appliqué". In January 2019 “Petals go Round, her first fabric collection with Henry Glass, Inc. will be released to quilt shops and we are proud to announce that we will carry the collection at Woodside Quilting.